"I have come that they may have life and have it abundantly."

Reform of the Roman Curia (Governing entities of the Catholic Church)

Reform of the Roman Curia (Governing entities of the Catholic Church

ROME – Following Saturday’s publication of the new constitution of the Catholic Church’s central government, on Monday, the Vatican confirmed that the power of governance does not come from ordination into the priesthood but from the mission entrusted to a person.

“It is no longer automatic that the head of a Vatican dicastery is a cardinal,” said Bishop Marco Mellino, secretary of the Council of Cardinals that has advised Pope Francis in the drafting of the new constitution of the Roman curia, Praedicate Evangelium (Preach the Gospel).

Explaining the significance of Pope Francis’s reform of the curia, which allows the laity to lead Vatican departments, Jesuit Father Gianfranco Ghirlanda stressed that the “power of governance in the Church does not come from the sacrament of Orders” that happens at priestly ordination, but from “canonical mission,” meaning, the faculty granted by the Roman pontiff on any given issue.

Pope Francis has announced that American Archbishop Charles Balvo, a veteran of the Vatican’s diplomatic service for more than 30 years, will serve as the next Apostolic Nuncio to Australia.

Archbishop Balvo, currently the Vatican’s ambassador to the Czech Republic, was born in New York City and was ordained a priest of the Archdiocese of New York in 1976.

After serving in apostolic nunciatures in South America, Africa, Europe, and the Middle East, Archbishop Balvo was appointed Apostolic Nuncio to New Zealand and several Pacific Island nations in 2005. He was also Apostolic Delegate to the Pacific Ocean.

In 2013, he was named Apostolic Nuncio to Kenya and took on responsibility for South Sudan after the country was established. While posted in Kenya, Archbishop Balvo also served as Permanent Observer to the United Nations Environment Program and Human Settlements Program.

He has been in the Czech Republic since 2018.

New video resources are now available for school leaders and teachers to support the delivery of Religious Education in Catholic schools across Australia.

The series of professional learning videos are designed to encourage discussion among Catholic educators through the unpacking of the Framing Paper on Religious Education in Australian Catholic Schools.

Produced by the National Catholic Education Commission’s Faith Formation and Religious Education (FFRE) Standing Committee, the resources were developed in collaboration with Catholic educators across the country.

“Faith formation lies at the heart of the work of Catholic schools,” Jacinta said. “These resources assist teachers and school leaders to reflect and deepen their understanding of the place of Catholic theology in Religious Education, and aim to build professional collaboration among staff."

“These resources support Religious Education staff to consider the variety of learners in the classroom with their unique life experiences, particular motivations, expectations and aspirations,” Sr Elizabeth said.

“These videos will enliven and energise staff, building their capacity to provide Religious Education which is responsive to their local school context and authentic to the Catholic tradition.”

As reported on the 30th of July the Diocese of Sandhurst has used Steps in Faith for preparing children for the sacraments of Reconciliation and Confirmation/Eucharist since 1993. Steps in Faith was reviewed and revised in 2002-2004. Please find below a link to a survey for those who have been part or or are part of Steps in Faith as a participant or a leader/facilitator. The survey link will also be sent to Parishes to be distributed to those who have participated in the program as leaders, parents or students. Please support us in as wide a distribution as possible. Once the survey data has been reviewed the review committee will propose names for a writing group to revise and update the material. Thanks in anticipation of your support in this important task.

The survey is anonymous and should be able to be accessed by anyone who has this link https://forms.gle/9bQjSm1ok5YT55Yx6

Last week during covid lockdown Fr Junray made some helpful points in his homily about the qualities of Shepherds in the context of vocations to the priesthood but the call to all of us on Mission and some wise advice from Henri Nouwen for coping with the pandemic and other anxieties in life. the video can be found here

or the transcript is below

Last weekend, we had glorious days celebrating the ordination at the sacred heart cathedral and the thanksgiving mass here in St Kilian’s of our newest priest in the diocese: Fr Adi Indra. In his first homily, Adi started his homily with this question:
What are your credentials?
What are the qualities of a shepherd? And I come to know the answer of this question, when I concelebrated at the funeral of Fr John Ware, just last Thursday morning at St Mary’s Church in Rutherglen.

Fr John planned his own funeral mass liturgy, he did not to include to eulogy and photo presentation. Even at his own funeral, he lay down his life for his sheep. In the liturgy, he did not want so much attention towards himself but he wanted to celebrate the Eucharist with so much beauty and simplicity for his people. Even his death is a witness for his love to the eucharist. A very eucharistic person, he wanted himself to be broken for others to have life. A true shepherd of the people and for the people.

Today’s readings take us to the qualities of the shepherd and especially to the heart of the Good Shepherd.

The shepherd will lead the flock so that there will no more fear and confusion, so that no one shall be missing. A shepherd leads. A shepherd refreshes the soul and gives courage. Jesus the Good Shepherd is our peace. Jesus Christ is our peace. His heart was moved with pity for his people because they are like sheep without shepherd. Our Lord Jesus Christ reveals himself as the shepherd of a flock who is filled with an extraordinary love and tenderness.

The primary quality of the shepherd cares for the weakest ones. A shepherd is always moved with pity and compassion for all those who are suffering, sick and the dying.

But I remind you, it doesn’t go really well all the time. It reminds me the story of French-composer Jean Philippe Rameau. When he was dying, the priest came to give the last rites and priest started to sing probably the Salve Regina, but the priest was singing so badly and Rameau said, “Shut up Father, you’re singing out of tune!,” and he died. So definitely, I will refrain from singing in the last rites otherwise that might be the last words to many of our parishioners here in St Kilian’s.

In effect, our church’s future lies through the growth of lay vocations/ lay leaders. This is a sign of the times. For example here in our diocese, there are lay people who are the main parish coordinators in the churches such as in Cornella, Murchison, Rushworth and Stanhope. They do not have any priests to look after them every single day but they have lay leaders to look after their own communities.

Here in Bendigo, there are quite a number of significant number of lay people who are leading and running the Bendigo Winter Night Shelter. They provide beautiful meals out of love, warm shelter, warm hospitality and most especially warm hearts. Many lay leaders in our community are the shepherds to many of our homeless brothers and sisters.

To become a good shepherd, we are called to become like Jesus and care deeply for the people we are responsible for with faithfulness, tenderness and mildness especially to the least, to the lost and to the last in our community. It seems to me that this movement of lay leadership will become a new normal in the future.

We are living in a time of high uncertainty, anxiety, and confusion. We don’t realise how much paranoia we carry each day. There are a lot of things seem to ruin our day.

Spiritual Master Henri Nouwen perfectly describes between paranoia and metanoia. He suggested that there two fundamental postures with which we can go through life.

We can go through life in the posture of paranoia, which is symbolised by a closed fist. It is a symbol of control, a habitual suspicion and distrust. Paranoia quickly turns warmth into cold, understanding to suspicion and generosity to self-protection.

The posture of metanoia is seen in Jesus on the cross. He is vulnerable, his arms spread in a gesture of embrace and his hands are open to God. A symbol of faith and trust.

Jesus, our Good Shepherd takes us to this movement from paranoia to metanoia especially in this critical time of the history so that we can see the crisis as it is with much understanding and empathy.

This movement is movement from control to trust
From humiliation to humility
From exclusion to encounter
From isolation to community.

The Jesuit Australian Catholics Site has been redeveloped into a new Education Hub and site to access the magazine.

The CESL has a subscription which makes this material accessible to all our schools. If you are interested in a tour of the new hub you can click here 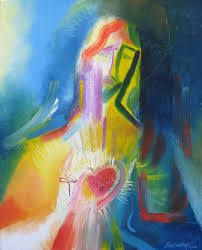 Devotion to the Sacred Heart of Jesus

Writers as early as St. Justin (second century) and St. Pope Gregory the Great (seventh century) drew on John 19:34-35 as a metaphor for the divine graces that flow from the heart of the crucified Jesus: “But when they came to Jesus and saw that he was already dead, they did not break his legs, but one soldier thrust his lance into his side, and immediately blood and water flowed out.”

Later spiritual writers, including St. Bernard of Clairvaux (twelfth century) and St. Gertrude the Great (thirteenth century), along with the preaching of Dominican and Franciscan friars, further developed and popularized devotion to the heart of Jesus.

Morning and Evening Prayer for the Feast